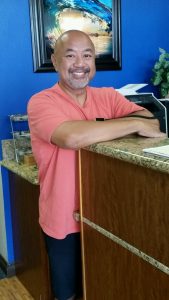 Dr. Tagle has been a practicing chiropractor since 1996 and practiced in Laguna Hills, California from 1999 to 2009 before deciding to retire. After 6 months, he realized that this is where God wants him to serve, so he went back to practice with various chiropractors across Southern California, from Santa Monica to Seal Beach before settling in Tustin, at Tustin Family Chiropractic.

Dr. Tagle graduated from Southern California University of Health Sciences (formerly LACC) in 1996 and was top of his class for his technique and clinical skills. He has been the owner of Tustin Family Chiropractic since May 1, 2014, and will continue to serve the City of Tustin for many years to come.

Dr. Tagle continues his education by taking post-graduate classes in Sports Injuries/Rehab, Dance and Golf Injuries, as well as Pediatric Care. He is the proud father of 3 amazing daughters who have been adjusted since birth, with the youngest one being only 12 minutes old.

When Dr. Tagle is not serving his patients, you can find him at the gym, golf course, or serving others as a Licensed Life Insurance Agent. He is dedicated to Being Fit, Eating Right, and Thinking Well… Naturally!